The Mystery of Irma Vep at Lost Nation Theater
﻿﻿
“Scheer is equally adept at wordless clowning and mile-a-minute dialogue, and he turns his limber body into a comic instrument in itself" - Alex Brown, Seven Days

"...These two New York actors, both Lost Nation veterans, played off each other with an intimacy and discipline with the depth of a theater version of chamber music. Yet with the sly moves, ribald double entendres and just plain good fun, the result was anything but what we think of as chamber music. It was joyous fun and sidesplittingly funny." - Jim Lowe, Times Argus

It just blew me away. Inspired physical comedy....Think Bill Irwin, Red Skelton, Keaton, the Marx Brothers, Chaplin, that kind of quality....If you think you are an actor, or a director, learn from this show. This is REALLY GOOD. Haven't seen this kind of wild precise stuff since I saw Marcel Marceau once. Really." - David Schein, actor/director/writer﻿﻿

"Ugalde makes great use of the actors’ lithe, acrobatic abilities, with a special dose of exquisitely timed near misses. If you don’t flinch at least once when the meat cleaver comes out, it’s because you’ve already covered your eyes.... The two actors are energetic, graceful and light enough to lift each other when dancing or fighting. Their acting approach and androgynous features give the cross-dressing a playful integrity.....Love and Scheer connect so well onstage that they remind us of what only live, collaborative theater can do. As tightly rehearsed as this show is, the actors never telegraph a moment. Each exchange blooms up fresh before us, with all the hard work concealed and all the fun conveyed.” - Alex Brown, Seven Days

The Possible and the Imp 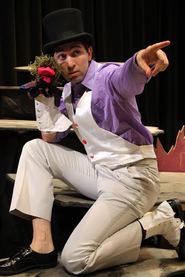 "Contrasting [Rosalind's] subtle comedy was Stoph Scheer’s ridiculously funny clowning as Touchstone. This wasn’t slapstick; rather it was overt comedy that was delivered with wit. It was just too funny, and it fit this play perfectly. (He also plays Audrey and William, but you’ll need to see the production to find out how.)" - Jim Lowe, Times Argus

"The boldest move is the production's most memorable innovation - all three sides of the Touchstone-Audrey-William triangle are put in one actor's hands. That hint as to how it's accomplished is the only one you're getting, but actor Stoph Scheer conveys all the necessary nuances of a last set of lovers in a play already stuffed with them." - Alex Brown, Seven Days 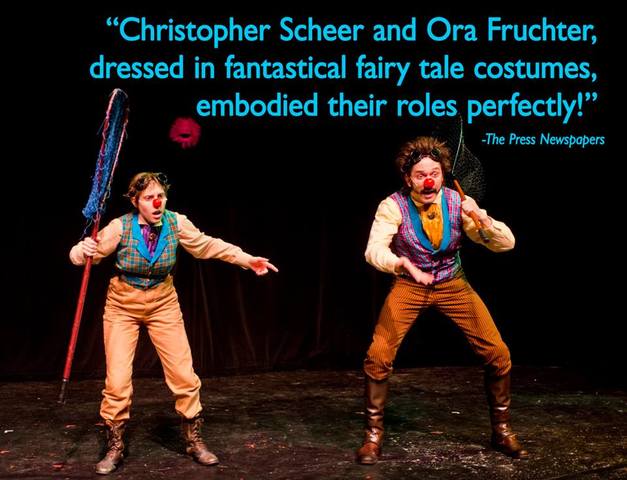 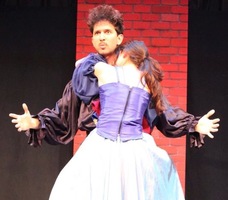 "Stoph Scheer and Eric Love, both expert comics, simply reveled in the roles of Antipholus and Dromio respectively. They not only delivered delightful comic characters, their intimate interaction is dangerously funny."  - Jim Lowe, Times Argus

"His transformations are sharp enough to make his mustache look like a villain's as Ephesus and like a sweet youth's first facial hair as Syracuse."  - Alex Brown, Seven Days

“Lost Nation Audience Nearly Dies Laughing
This reviewer has never—at Lost Nation or anywhere else–seen an audience laugh so hard and so long as at this play. Simply put, we were convulsed with laughter for almost the entire 90 minutes at the sheer mad genius of what was happening up there on the stage.

Lost Nation director Kim Bent assembled an amazing cast of three young actors—who are also trained variously as a magician, clown, and a cellist—from three corners of the country—New Mexico, New England, and Louisville/New York City, and simply turned them loose on this outrageous, madcap romp through Shakespeare’s plays.” - M.D. Drysdale, The Herald of Randolph

“Actors Aaron Aubry, Eric Love and Stoph Scheer prove their mettle as comedians (and Love as a cellist and Scheer as a magician, as well) in this madcap comedy.” – Jim Lowe, Times Argus

The Mystery of Irma Vep ​at Cortland Repertory Theatre

"Vep is a blast...A great show, fun, entertaining and irreverent.  John DeSilvestri and Stoph Scheer are both newcomers to CRT, but with theater credits up one wall and down the other.  It looks like they've earned everyone one of them."
- Katie Hall, The Cortland Standard

“This striking set allows director Bert Bernardi to turn the stage into a cartoon frame for the ghoulishly outsized performances to come, and DeSilvestri and Scheer oblige with tour-de-force performances....

(They) probably met for the first time a few weeks ago, but they attack the show with the gusto of a veteran comedy team."
Bryan VanCampen - The Ithaca Times

“Nicodemus has one wooden leg, and Scheer gets maximum laughs with that premise, flailing and stumping around with the leg moving at all angles. He can use it to make major comedy out of sitting down.” - Neil Novelli, The Syracuse Post Standard

“That artificial limb has a way of taking on a life of its own, springing up when least expected or flying over the heads of the unwary.” - James MacKillop, The Syracuse New Times

“I was completely struck by the enormous shift I could feel when Laertes is wounded by the envenomed blade. It was as if his entire worldview pivoted and all the consequences struck home. I can't point to what you did that conveyed that, but it was like an avalanche!  I choked up (again!) when Laertes begs forgiveness of Hamlet but I think I got a better grasp on why this time. The plea is so desperate and so genuine that you can't help but respond.” – Morgaine, audience review

“How do you make your voice so dark chocolate-rich and intense? Utterly luscious.” – Sarah Andrews Squier, audience review